Both coaches spoke on the challenges that teams face in light of the Covid-19 pandemic, with Dalley saying that even though the GHSA has given some guidance, the whole situation regarding Fall Sports remains fluid.

Dalley also spoke about the all-new Vidalia Athletic Website (www.vidaliaathletics.com) and the new electronic ticketing and Season Pass options that are now available.

Coach Cameron gave a brief talk about how he ended up in Vidalia and the excitement that he and his family have felt since arriving. Cameron also explained the GHSA’s decision to move the start of Football season back two weeks to September 4th. With the new schedule in place, the Indians will now open the regular season on the road against Appling Co. on September 11th. 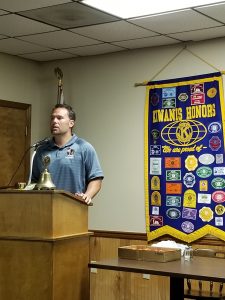