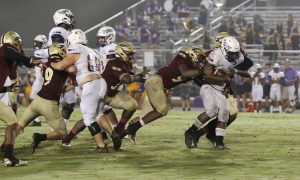 With 5:56 left to go in a 14-14 game, the Bleckley County Royals used a short field 4 play drive and scored the game-winning touchdown with 3:09 to go to defeat the Vidalia Indians 21-14 on Senior Night for the Indians.

The game started with both teams swapping possessions in their first two series. Bleckley County finally getting on the board with 3:52 to go in the first quarter on a 14-yard pass from Dominic Sasser to Jayden Mobley to give the Royals a 7-0 lead following a James Fordham PAT.

The Indians would come right back on their next possession, moving the ball from their own 37-yard line to the Bleckley 47 in just two plays. Then on 2nd down and 10, Bryce Davis would turn left to hand the ball off, but with no running back there, would keep the ball himself and outrun defenders to the goal line to put the Indians within a point 7-6. The Indians decided to go for two, which appeared to be successful, but an illegal shift penalty brought the try back to the 8-yard line where Tate McDaniel’s kick sailed wide left to keep the score 7-6 with 1:04 to go in the half.

Bleckley County looked like they would take the lead on their next possession, taking the ball from their own 20-yard line to the Indian 24 yard line in 15 plays before Antrevion Williams picked off a Sasser pass on a 4th down play, saving a potential touchdown and giving the ball to the Indians with 7:20 to go in the half.

The Indians then got their offense wound up going 90 yards in just 6 plays to take the lead 14-7. The drive’s big play was a 59-yard reverse pass and catch from Antonio Barron to Jayden Stanley from the Indian 32 to the Royal 9. Two plays later, Bryce Davis hit Josh Mincey for a 14-yard score. Davis then hit Barron for the 2 point conversion to put the Indians up by seven with 6:07 to go in the half.

Bleckley County would come roaring right back down the field, moving the ball from their own 25 to the Indian 36 yard line before the drive appeared to be stopped, with 3:15 to go in the half. But on 4th and 12, Sasser hit Mobley on a wide receiver screen and got a huge block from Amerius Mims, (the number 1 lineman in the state of Georgia) and scampered 34 yards for the score and with 3:09 to go in the half, it was 14-14 following the PAT.

The Indians would almost take the lead at the half, moving the ball from the 35 to the Royal 30, setting up a 46-yard field Goal attempt by Tate McDaniel. McDaniel hit a perfect kick on a wet, soggy field, but came up just inched short as the half ended.

Neither team could produce any score or sustain any drives during the third quarter with the Indian defense coming up big on 4th down stops and Bleckley County picking off two Davis passes.

The 4th quarter began as the third ended with the Vidalia defense turning the Royals over on downs. With 9:50 to go in the game, the Indians would drive the ball to their own 39-yard line before a holding penalty sent them backward and forced a Vidalia punt with 5:12 to go.

With the ball spotted at the Indian yard line, Bleckley County would get the game-winning score on Chuckie Stephens 1 yard run to give the Royals the win.

With the loss, the Indians fall to 0-2 to start the season and host Richmond Academy Friday night for Homecoming at Buck Cravey Field, with kick set for 7:30. If you cannot or choose not to attend the game, you can watch the game live by clicking here for $10.00.