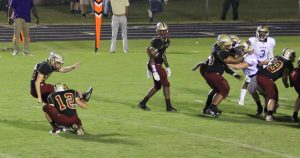 The Vidalia Indians survived two comeback attempts by the Musketeers of Richmond Academy to get their first win of the season 33-21 Friday night on Homecoming Night 2020.
The Indians, who had lost two close games to ECI and Bleckley County to open the season, led 14-0 in the first quarter only to see the Musketeers reel off 14 straight to tie the game with 4:31 to go in the half. The Indians again led by 13 points in the 2nd half only to see Richmond Academy cut the lead to just six points in the 3rd quarter. The game was still up in the air until Kaylan Johnson scored on the game’s final play on an interception.

The Indians racked up 337 yards, including 285 yards rushing in their largest offensive output of the year. Junior Quarterback Bryce Davis led the way with 146 yards on 11 carries with Jaedyn Stanley adding 77 yards with two touchdowns. Robert Brown rushed for an additional 62 yards on nine attempts to cap the ground attack. Davis was only 5 for 15 through the air for 52 yards with a TD but had several catchable balls dropped by his receivers.

The Indians won the toss to begin the game and promptly took the ball 73 yards in 7 plays to get the first score of the night on a 24-yard pass from Davis to Josh Mincey to make the score 7-0 with 9:23 left in the opening quarter following Tate McDaniel’s PAT. The Indians defense forced the Musketeers to turn the ball over on downs after a 4th down stop by Jordan Powell on 4th and 4.

The Indians wasted little time getting their second score of the night on a 4 play 52-yard drive, which was capped by Stanley’s first score from 4 yards out to make the score 14-0 following McDaniel’s PAT with 5:52 to go in the first quarter. The score was set up by Davis’s 26-yard run, from the 43 down to the Musketeer 17. But that was all the offense the Indians could muster for the next 15 minutes of the game as Richmond Academy would come roaring back in the 2nd quarter. 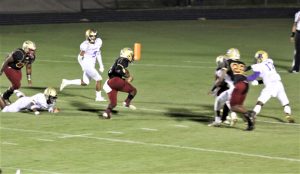 The Musketeer’s first scoring drive came on their first possession of the 2nd quarter. Following a Bryce Davis 37 yard punt, which pinned the Musketeers at their nine-yard line, Richmond Academy would need only two plays to cut the lead to 7 points. Following a pickup of 40 yards on 1st down, Rashad Williams would make 3 Indian defenders miss the tackle at mid filed and scampered 51 yards for the score, which pulled the visitors with seven following a successful PAT.

The Indian’s offense could not move the ball on their next possession and was forced to give the ball back to Richmond Academy with 10:13 left in the half.

The Musketeers would then go on a 12 play 45-yard drive, converting three third downs, and tie the game 14-14 after quarterback Jack Murphy ran it in from 2 yards out on a quarterback draw.
The Indians would get their offense back on track during their next possession. Moving the ball from their own 40, the Indians used the running of Davis, Stanley, and Brown to get down to the Richmond Academy 16 yard line. But two incomplete passes and a 5-yard run failed to garner a first down. So the Indians would call on Tate McDaniel to retake the lead, which he did with his first Field Goal of the night, a 33 yarder to give the Indians the lead at the half 17-14.

Vidalia began the second half the same as the first, scoring on an 8 yard TD by Stanley to make the score 24 14 with 8:45 to go in the 3rd quarter. Davis again used his legs and speed to set up the score on a 32-yard carry to the Richmond Academy 13. The Indians would again turn the Musketeers over on downs, and McDaniel would extend the lead on a 34-yard field goal with 4:56 to go in the third.

But Richmond County would draw within six on their next possession when Maurice Freeman slipped by the Indian secondary and caught a strike from Murphy on the run resulting in a touchdown just two plays into the drive to make the score 27-2 with 3:49 to go in the third. 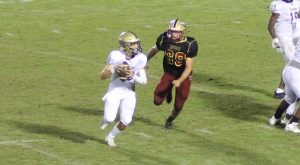 Vidalia would be unable to move the ball, and it looked like Richmond Academy would spoil the Indian’s Homecoming. Moving the ball with Freeman, Williams, and Jontavius Curry, the Musketeers moved the ball from the Vidalia 9 yard line to the Indian 46-yard line. But on 4th down and three, Williams would take the ball up the middle, where he looked like he would get the first down. But Jaylin Burns had other ideas, stopping Williams on a vicious hit, and keeping the running back from securing a first down and again turning the ball over on downs to the Indians, with just a little over two minutes to go in the game.

But again, the Indians failed to secure a first down. Still, Davis hit a 46-yard punt which rolled inside the five-yard line to the three, where Richmond Academy would pick up one first down before Murphy threw an interception on the last play of the game which Johnson took to the house for the last score of the game. 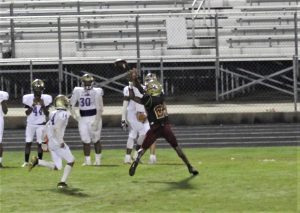 After the game, First-Year Head Coach Jason Cameron gave the credit for the win to the team “This wasn’t your typical Homecoming opponent. They came in here 3-0 and loaded with athletes who could run in space. But I am so proud of how we fought through adversity and battled back to secure the win. It sure does feel good!”

The Indians will take a week off before returning to action on Friday night, October 16th, as they travel to Tattnall County to take on the Battle Creek Warriors before opening the 2AA schedule against Jeff Davis October 23rd. (Pictures Provided by Carroll Williams) 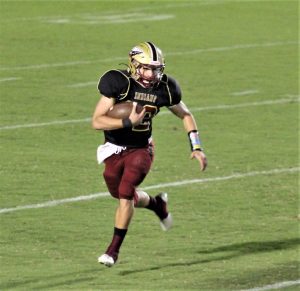 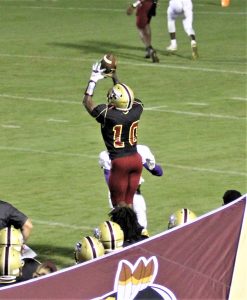