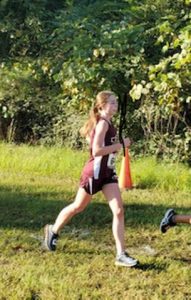 The Vidalia Cross Country Teams continue to run well, having another successful week of racing.

The girls also placed 2nd to Bleckley County with 2 medalists in the event. Sarah Owen placed 3rd with a time of 13:04, and Isabella Holloway placed 14:19.

Saturday, the teams hit the road to run in the Braves Invitational in Milledgeville, bringing home more hardware and personal bests.

The Ladies once again finished in 2nd place with Sarah Owen just missing her personal best performance, placing 2nd with a time of 20:40. Isabella Holloway placed 14th with a time of 23:05, and Kaitlyn Allen, Ashley Hammock, and Kayleigh Folsom also had exceptional races pacing the Lady Indians to the runner-up finish behind George Walton Academy by just 8 points, 96 to 104. Folsom, who has just finished up volleyball, improved her time by over 2 minutes with a time of 25:03, making her a strong number 5 runner for the team.

The boys finished third behind Lakeside and Groveside with Michael Blount continuing his outstanding sub 18 times. After a tough 2 mile course in Bleckley, he made the quick turn around and ran a 17:51, placing 7th on Saturday and Head Coach Mandy Godbee say that Blount continues to exceed expectations as a runner and captain of the team. “He has the ability to compete with the best while encouraging and expecting excellence out of his teammates.”  Luke Palmer and Jace Gabbard continue to run well and stay on Blount’s heels, placing 12th and 15 respectively in the race.

Godbee continued by saying that this is a great time of the year for her runners. “This is the most exciting time for the season for our runners. Their hard work and dedication are paying off exponentially, with times dropping every race. I am honored to be a part of this program.” The Indians return to Bleckley on Thursday, for a 5k Race beginning at 4 pm.