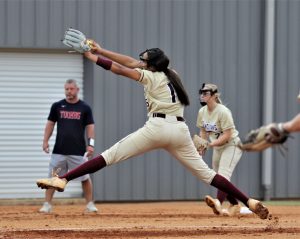 The Number 1 Ranked Vidalia Lady Indians used two long balls in the first inning and got 14 strikeouts from freshman Tymber Harris in route to a 13-1 five-inning win over Toombs County in the final game of the Region schedule for the Lady Indians.

The Lady Indians win over Toombs County gave Toombs their first loss at their new field and capped a Region 2AA season with a 14-1 record. “Hats off to them, they have a really nice facility,” said Vidalia Head Coach Brad Thompson. “We were able to take some on the field BP because we didn’t have a long drive, and I think that the girls were able to adjust to their pitcher because of that,” Thompson added.

In the first inning, the Lady Indians got two home runs to take a commanding 7-0 lead going into the bottom of the first. Senior Ashtyn Braddy scored Vidalia’s 1st run after being hit by the Toombs County pitcher and then crossing the plate on a throwing error to make it 1-0. Tori Wright then hit a 3 run homerun to score Bailey Holland and Emma Humphrey to give Vidalia a 4-0 lead. Then with one out in the inning, Harris singled, and then Madison Starr hit a high fly ball that had enough carry to clear the centerfield fence to spot the Lady Indians a 6-0 lead. 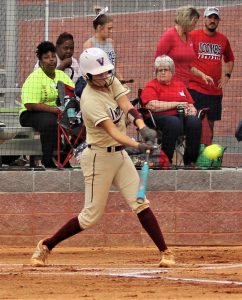 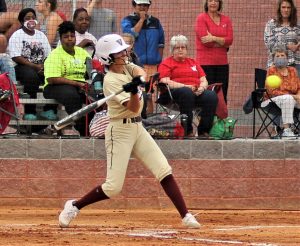 The Lady Indians would score one more run in the first on an RBI single by Braddy, which scored Rileigh Robinson to make the score 7-0 before Toombs came to bat.

The seven runs proved to be more than enough for Harris, who fanned 14 Dog hitters to pick up the win. “Tymber is poised above her years,” said Thompson. “You know she came in the middle school where they had a pretty good season, but has grown so much as a player and learning how to use her height to become better,” Thompson ended.

Vidalia picked up 3 more runs in the 2nd and 3 in the 5th to end the Region Schedule with 14 wins and the number one seed heading into the State Tournament in two weeks. The Indians who are now 24-4 overall and will wind up the regular season in Springfield today as they take on Effingham County and Thompson said that he hopes to be able to get some work in for his two other pitchers “we will probably go with a combination of Madison and Bailey because they have the

extended lineup that we need to see and go over there and play Vidalia Softball and hope it works out for us.” (pictures courtesy of Carroll Williams)