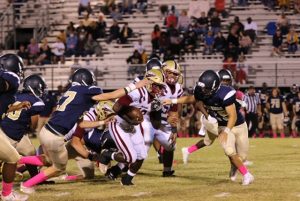 The Vidalia Indians got 199 yards and 3 touchdowns from Bryce Davis and an 85-yard kick return from Josh Mincey as they rolled over the Tattnall County Battlecreek Warriors 40-14 Friday night on the road. Davis had runs of 53 yards, 2 yards, and 24 yards as the Indians moved to 2-2 on the year and will open Region 2AA play next week against Jeff Davis.

Vidalia wasted no time getting on the board as Mincey returned the opening kick 85 yards for the score, and just 15 seconds into the game, Vidalia led 6-0 following a failed 2 point try.

The Indian defense would force Tatnall to punt on their first possession but then would give it right back to the Warriors when a Tattnall defender put his helmet on the ball forcing a turnover in Vidalia territory. Tattnall Co. would take their only lead of the night on a 14 yard run by Matt Mobley, and following the PAT, Tattnall led 7-6 with 7:50 to go in the opening quarter.

That lead wouldn’t last long as Davis would get his first TD just seconds later as he outraced defenders 53 yards to paydirt to give the Indians the lead they would not relinquish; following Tate McDaniel’s PAT, it was 13-7.

Davis would get his 2nd score of the night 3 minutes into the 2nd quarter on a 2-yard run, which was set up by hard running by Davis, Jaedyn Stanley, and Darrell Brown. Once again, McDaniel was good on the kick, and the Indians lead was 20-7.

Tattnall would answer 2 minutes later with a 71-yard pass play from Jerimiah Mainor to Tyler Jinks for the score, and with 7:01 left in the half, Vidalia led 20-14.

The 2nd half was all Vidalia, with Davis getting his third touchdown of the night on a 24-yard run to make it 27-14. Jaedyn Stanley would go 61 yards in the 4th quarter to make it 33-14 after another failed 2 point conversion, and Antonio Barron scored on a 21 yard run with 46 seconds to make the final 40-14.

On the night, the Indians would rush for 370 yards on 39 attempts with Davis leading the way and Stanley adding 90 yards on 8 carries, Barron rushed for 42 yards, and Brown rushed 12 times for 36 yards.

The Indians will now host Jeff Davis Friday night at 7:30 as they open Region 2AA play.