The Vidalia Indians used 35 second-half points to defeat previously unbeaten Jeff Davis 42-18 Friday night at Buck Cravey Field. The Indians’ win was the third in a row as they now stand at 3-2 & 1-0 in Region 2AA.

The Indians again rushed for over 300 yards, with Bryce Davis credited for 179 yards and 4 TDs and Jaedyn Stanley adding 114 and 2 scores. That was done against a defense who was only giving up 106 yards on the ground per game through their first five games. The Indian defense also stood strong, allowing Jeff Davis just 18pts, which was 13.6 points below their yearly average, and gave up 195 yards on the ground, which was 120 yards below the Jackets yearly average, with most of those coming in the 4th quarter when the game was already decided.

The Indians would take the opening kickoff and drive the ball 54 yards in 13 plays using a combination of running and throwing to get down to the Jeff Davis 21 yard line. But the Jacket defense would stuff a 4th and 3 and take over on downs at the 21 with 7:01 to go in the opening period. 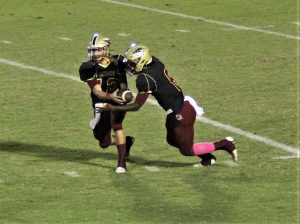 hat Jacket possession wouldn’t last long because, on the 2nd snap from scrimmage, a Vidalia defender would knock the ball loose from a Jacket ball carrier, and Kaylan Johnson would catch the ball in mid-air and take it down to the 11-yard line. Two plays later, Stanley would get some great blocking from his offensive line, which would result in his first of three scores on the night on an 8-yard run. Tate McDaniel added the extra point, and Vidalia led 7-0 with 6:20 remaining in the first quarter.

Jeff Davis would answer 4 minutes later when Cade Walters hit Michael Dotson on a 33-yard pass to make it 7-6 with 2:11 to go in the quarter following a failed 2 point conversion attempt.

Vidalia’s offense went to work again, using Stanley as the bell cow driving it from their own 20-yard line to the Jacket 6-yard line in 15 plays and chewing up over 5 minutes off the clock before stalling again. Tate McDaniel’s 25-yard attempt would sail wide to the right, and the Indians lead remained one.

Both teams would exchange punts on their next possession, but with 1:06 to go in the first half, Jeff Davis would take their only need of the night. Riding the back of Cade Walters, who ran and threw the ball with ease, set up a 22-yard touchdown pass to CJ Parker with 22 seconds to go in the half. Again the Jackets would go for two, and again the Vidalia defense would rise to the occasion and stop the Jeff Davis runner short of the line keeping the score at 12-7 heading to the half.

The second half was all Vidalia. The Jackets’ first drive of the half resulted in a 3 and out forcing a Walters’ punt, which gave the ball to the Indians at the Jeff Davis 44-yard line. That’s when Bryce Davis took over. On the very first snap of the second 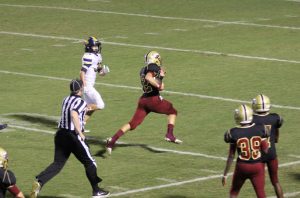 half for the Indians, Davis faked a give up the middle and pulled it at the last second, scoring from 44 yards out to give the Indians a 14-12 lead, following McDaniel’s PAT.

The Indians defense would again come up big on Jeff Davis’ next possession forcing another 3 and out situation and a Jacket punt which stopped at their 44-yard line. 2 plays later, Davis would hook up with Matt Hill on a catch and run for 40 yards, and the Indians were in business. 1 play later, Stanley would take it in from the 4-yard line to make it 21-12 following McDaniel’s PAT. 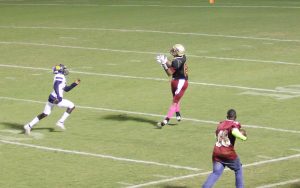 The Indians would score one more time in the third quarter on an 11 yard run following an Ira Clements interception to make the score 28-12 with 5:29 to go in the 3rd quarter.

The 4th quarter saw Vidalia score again early on to make it 35-12 on Bryce Davis’ 24-yard power run following a fumble recovery by the Indians at the Jeff Davis 27 yard line.

The Jackets would get their only other score of the night in the final quarter when Willie Skipper took a direct snap from center and scampered around the end for the Jacket score to make it 35-18 with 3:55 to go in the game.

Vidalia’s 4th touchdown of the night came on Davis’s 65-yard run from the Indian 35, outrunning Jacket defenders along the way to make the final score 42-18.

The Indians finished with 393 yards on the night, with Davis (179/4 TD’) leading the way on the ground and through the air (8/14/93 yds) to get the win, and Head Coach Jason Cameron gave credit to Davis and the offensive line, “we felt coming in that we could move the ball on these guys, but our offensive line exceeded expectations and opened up some huge holes for Davis who also did his part.”

Before the game, the Vid 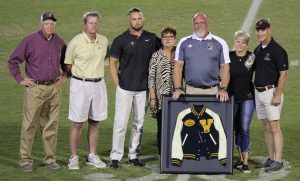 alia All Sports Boosters presented former Vidalia Coach Jason McBride and sister Angie with a case that enclosed the letter jacket of his dad Travis McBride, who passed away in 2017. Both McBride and his wife Hilda were very involved in the Boosters and both were honored at the same time with a Gold Seat in the Home section dedicated to their name. Ms. McBride passed away in 2019.

Next up, the Indians will face East Laurens on the road Friday night, and a large group of fans is encouraged to go and back the Indians. (Pictures courtesy of Carroll Wiliams)