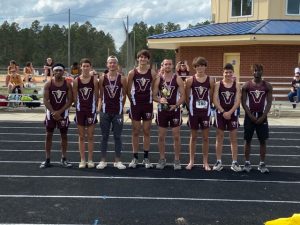 ichael Blount erased a 26-second deficit to overcome two Jeff Davis runners and take the Boys Individual Region 2AA Championship, Wednesday in Hazlehurst. Blount’s finish over the last 800 meters paired with a 4th place finish by Jace Gabbard helped the Indians to a 2nd place team finish and propelled them into the State Championship Meet on October 7th.

The Lady Indians also placed 2nd in the Region, coming in just 5 points behind Jeff Davis, and will also compete in Carrollton on the 7th.  Sarah Owen placed 2nd to Jeff Davis’ Zoie Marchant with Kaitlyn Allen, placing 4th.

Blount trailed two Jeff Davis runners with 800 meters to go in the boy’s race but found another gear and began chipping away at the leaders closing the gap enough to outsprint them down the stretch. Luke Palmer, Andrew Hodges, and Daniel Hodges all finished the day with top 10 finishes, but it wasn’t enough to overcome Jeff Davis for the Championship. 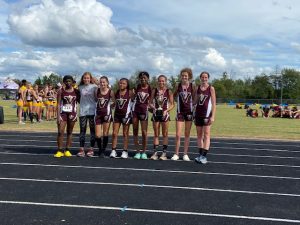 The Lady Indians, who also fell short of the Region title, had good showings from Ashley Hammock and Kayleigh Folsom, who placed 8th and 9th with Jakerra McRae placing 14th. “These young ladies have fought through numerous obstacles and entered this race-ready for battle, and battle they did,” Said Vidalia Cross Country Coach Mandy Godbee.

“At the end of the day, Coach Humphrey, Coach Palmer, and I are pleased with the growth and results of every runner on the team. We look forward to a great race at the state meet in Carrollton, GA, on October 7th,” added Godbee.