The Vidalia Indians got a 12-yard touchdown run from Bryce Davis in the 3rd Overtime to defeat the Toombs County Bulldogs 39-36 Friday night in Vidalia. The Junior quarterback’s dive into the end zone capped a night where he rushed for 133 yards and a TD and threw for 3 TD’s and 125 yards. With the win, the Indians move to 5-2 on the year and 3-0 in Region 2AA and control their own destiny in their quest for a Region Championship as Jeff Davis knocked off Swainsboro 15-7 in overtime.

“I’m so incredibly proud of our guys,” said Vidalia Head Coach Jason Cameron. “They fought incredibly hard and fought through adversity and injuries to win this game. People don’t know what these kids have gone through to get to this point, and I couldn’t be happier for them.”

The Indians and Bulldogs swapped turnovers on their first possessions of the night before Toombs would draw first blood on a Chandler Lynn to Tyler Heath 18 yard pass in the back corner of the end zone to give Toombs it’s only lead in regulation, 7-0 with 5:22 to go in the quarter. 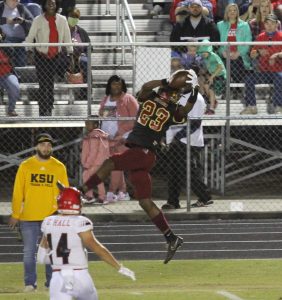 The Indians would answer with a score of their own when Davis would hit Josh Mincey on the first of two Mincey TD’s, this one a 32-yard throw on 4th down for the score to make it 7-6. That’s when things got a little crazy. The Indians lined up in their “swinging gate” formation and pitched the ball over to Antrevion Williams, who started toward the goal line, only to stop after a whistle was blown. The referee would rule that he was whistling the ball in play instead of blowing it dead, and the result was a missed 2 point conversion, leaving the score 7-6 with 1:51 to go in the opening quarter.

Both teams would then swap punts, which pinned Toombs County down inside their 5-yard line. Following a three and out, Lynn’s punt came up short at the 24-yard line, and 2 plays later, Davis would find Mincey in the end zone for his 2nd touchdown of the night to make the score 13-7 following Tate McDaniel’s PAT.

But Toombs would come right back down the field. Beginning at their 34-yard line, the Bulldogs drove it 66 yards in 15 plays capped by another Lynn to Heath pass, this time 13 yards, and the game was tied at 13-13 following a missed PAT by Julian Marin-Vital. That’s the way the half would end tied at 13-13. 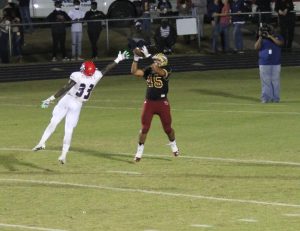 Lynn and the Bulldogs would come right back with a 42-yard pass to Derrick Mincey to tie the score at 20-20.

The Indians’ next points would come on the next drive of the night. After moving the ball from their own 37-yard line to the Toombs 1 yard line, the Indians offense bogged down, and the Toombs defense forced a field goal try by McDaniel from 23 yards out to put Vidalia back on top 23-20 with 9:05 left in the game.

Toombs would get a great kick return by Lynn on the ensuing kickoff to the Indian 32 yard line. After allowing a first down, the Vidalia defense stiffened, forcing a 39-yard field goal attempt that slid under the crossbar, giving Vidalia the ball with 6:49 left in the game. 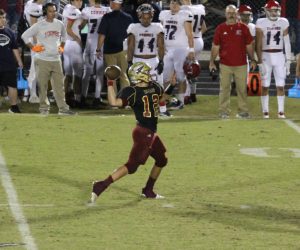 But, Toombs County was not done. On a third down and 9 from their own 21-yard line, a Toombs defender would pickoff a Davis pass and take the ball all the way to the Vidalia 7 yard line. But once again, good defense aided by a couple of penalties forced another field goal attempt by Marin-Vital, which he made with 4:13 to go, making the score 23-23.

That’s the way regulation would end. In the first overtime, Toombs took the ball first and scored on a 4th and goal from the 1-yard line on a Mincey run off the left side. The PAT was good, and with the score 30-23, Vidalia was in a must score position.

And score they did! On the 8th play of the drive, Bryce Davis followed, blocking off his left side to reach pay dirt, and with McDaniel’s PAT, we were knotted at 30-30 at the end of the first overtime.

Vidalia would not be able to get the ball in the end zone on their possession of the 2nd OT, so Tate McDaniel would kick a 27 yard Field Goal to give Vidalia the lead 33-30.
Toombs was also not able to score a touchdown, so they turned to Marin-Vital, who would this time kick a 37-yard field goal to tie the game and force a third overtime.

The Indians’ defense, although exhausted and riddled with injuries, bowed their back and forced another field goal attempt on which Marin-Vital was true from 28 yards out to put Toombs up 36-33.

It was during this third overtime that Davis would perform his magic and win the game on the 3rd down play. On the night, Mincey led all VHS receivers with 4 catches for 95 yards and 2 touchdowns. Jaedyn Stanley ended the night with 17 carries for 71 yards, while Jaylin Burns (11) and Dawson Campbell (8.0) lead the Vidalia defense. 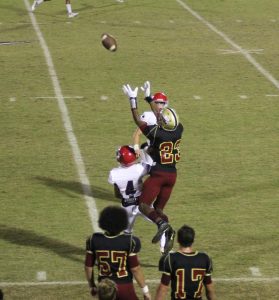 Up next for Vidalia is Bacon County on the road in Alma Friday night with the kick set for 7:30