The GHSA Cross Country State Championships took place over the weekend on a wet, sloppy course in Carrollton, where the Vidalia Indians and Lady Indians both finished in 7th place in Class 2A. 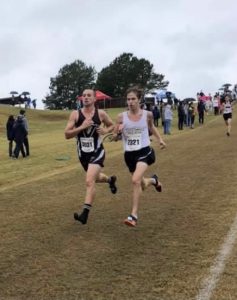 In the boy’s race, which began at 12:30, 2AA Champion Michael Blount, who was running in the last cross country race of his high school career, faced adversity from the beginning of the race. Blount was apparently clipped and lost his shoe. But Blount didn’t let that slow him down, running with one shoe on the rain-drenched course finishing in 28th place. Luke Palmer had his best race of the season and personal best on the challenging course while Jace Gabbard, Daniel Hodges, and Andrew Hodges rounded out the team’s top finishers and scorers.

By the time the girls took to the course, the conditions had improved, and Sarah Owen and Kaitlyn Allen conquered their previous personal bests for the course and paved the way for the team. Kayleigh Folsom, Ashley Hammock, and Jakerria McRae all competed well and scored for the Lady Indians. 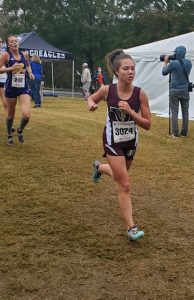 Even with the 7th place finishes, Head Coach Mandy Godbee was upbeat about the season, “It has been a joy and honor to coach such fine young men and women with the help of Erica Palmer and Lee Humphrey. Their ability to overcome adversity and their determination throughout the season sets them apart from so many other runners and teams. This is one of the finest teams I have had the pleasure of coaching.”