On a night when the Vidalia Indians fought a slippery football and an emotional letdown from last week’s triple-overtime win against Toombs County, the Indians were able to muster enough points and play hardnose defense to defeat the Bacon County Red Raiders 20-14 Friday night in Alma. The win, coupled with a Swainsboro loss to Toombs County, gave the Indians the Region 2AA Championship, their first since 2014.

After the win, Head Coach Jason Cameron, who became just the second Vidalia Indian Head Coach to win a Region Title in his first season at Vidalia, commended his team and coaching staff for fighting hard, “this was a tough game against a tough team, and we faced some adversity, but our guys pushed through it. I couldn’t be happier for our guys and our staff; they have all worked hard, and to be able to get this win and a Region Championship on top of it is sweet.”

The Region Championship looked as though it might have had to wait, as Bacon County recovered a Vidalia fumble on the first play from scrimmage to set up the first score of the night. From the Vidalia 28 yard line, Bacon Co. used the power running of Terriyon Moore and Jimarion Guyton to set up a 2nd down from the 4-yard line. That’s when Moore would take the ball off the right side and follow blocking into the end zone for the first score of the night to take an early 7-0 lead with 9:46 to go in the opening quarter. 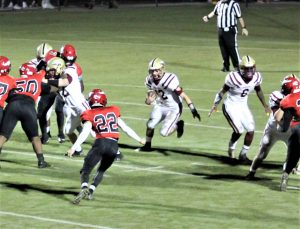 But the Indians would answer that score with a score of their own. Using a power running game by Jaedyn Stanley and Bryce Davis, the Indians would go 75 yards on 9 plays before Davis would cap off the drive with a 3-yard run to close the lead to7-6 Tate McDaniel made good on the extra point, and the game was tied 7-7 with 7:06 to go in the quarter.

Bacon would take the ball on their 23-yard line after the kickoff and drive the ball to the Vidalia 31 yard line before Ira Clements picked off an errant Moore pass at the Vidalia 10 yard line to keep the score knotted at 7-7.

Neither team would be able to muster up much offense for the rest of the half until the Indians took over at their 15-yard line with 1:28 left to go in the half. At that point, the Indians used a combination of running and throwing to get the Indians down to the Raider 5-yard line with a little over 20 seconds to go in the half. On the next play, the Indians would use some trickery to take their first lead of the night. On the play, Davis appeared to be running an option to his left but was wrapped up by a Bacon defender and appeared to be going down, but Jarmar Mack was on his way from the left side for a called reverse pass. As Davis was going down, he 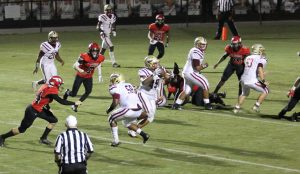 somehow got the pitch off to Mack, who launched it to a wide-open Jaedyn Stanley for the score, and following McDaniel’s PAT, the Indians led 14-7 with 9.9 seconds to go in the half. 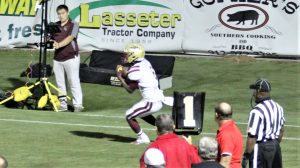 But Bacon County was not finished and tied the game on their next possession, driving the ball 76 yards in 5 minutes and 19 seconds to tie the game at 14-14 on a 4 yard Guyton run and a successful PAT.

The Indians would then retake the lead on their next possession. Beginning at their 27-yard line and using a combination of running and passing, the Indians capped off a 10 play 73-yard drive when 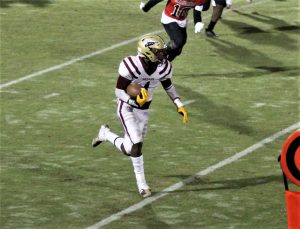 Davis, on a 2nd and goal from the 1-yard line, took the ball off the left side and outraced the Raider defenders to the corner of the end zone to retake the lead at 20-14. The PAT was blocked, and with 2:37 to go in the 3rd quarter, the Indians led 20-14.

Bacon County would have a couple of cracks at the lead, but Moore’s interception at the Vidalia 3 yard line by senior Kaylan Johnson stifled that drive. The Indians would go three and out on their possession, and a 49-yard punt by Davis pushed the Raiders back to their 43-yard line.

Bacon County appeared to have 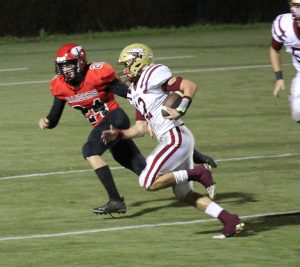 control of the game, driving the ball down to the Vidalia 29 yard line. But a sack and an intentional grounding call against Bacon County forced the Red Raiders to punt, sending the ball to the Indian 10-yard line with just 2:58 to go in the game.

But on the first play from scrimmage, Davis would take off to the right side, picking up 8 hard-fought yards to the 18-yard line. That’s when Davis, trying to get extra yards, spun away from a defender only to be met by Tamarcus Pruitt, who delivered a hard jolting blow to Davis, which caused him to fumble the ball away with Bacon County recovering at the 18.

That’s when the Vidalia Defense put up one of many great defensive stands on the night, forcing Moore to run in traffic down to the 13-yard line. Then on 4th and 5 to go, Bacon would bring in Nakosi Batton to try and throw a pass to Moore, but Batton’s pass sailed high and long, giving the Indians a 1st down with 1:19 to go.

From there, the Indians used Bryce Davis to ground out two first downs, and with 45 seconds to go, the Indians would go into the Victory formation with Davis kneeling as time expired, giving the Indians a hard-fought 20-14 victory.

The Indians have now won six straight games since losing their first two games of the year and now stand at 6 and 2 and 4-0 in 2AA. Friday night will close the regular season as Swainsboro comes to town to close out the regular season. Kickoff is scheduled for 7:30 at Buck Cravey Field. With the win, Vidalia locked up the number one spot in the Region with Jeff Davis, Toombs County, and Swainsboro all locked into 2nd thru 4th place.