The Vidalia Indians overcame a sluggish 1st half-filled with mistakes and penalties and a solid defense to defeat the Swainsboro Tigers 21-7 Friday night in Vidalia in the final game of the regular season. The Region 2AA Champions will now get ready to open the GHSA State Playoffs next Friday when they host the Bleckley County Royals, a team who defeated the Indians in week three, 21-14.

On their second possession of the night, the Indians got on the board first, with a six-play 49-yard drive that was capped by a Bryce Davis 15 yard pass to Kaylan Johnson, who caught the pass in 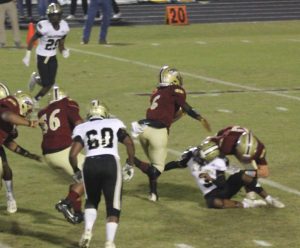 the back right corner of the end zone for his first touchdown of the year. Following Tate McDaniel’s PAT, the Indians led 7-0 with 6:36 to go in the quarter.

The Swainsboro offense, which was stymied by the Indian defense most of the night, went three and out and punted the Indians down to the 15-yard line. The Indians then began a 13 play drive, which saw them drive the ball all the way to the Swainsboro 2 yard line on the back of Jaedyn Stanley and Bryce Davis’s hard running, with Davis reeling off a 23-yard run to set up 1st and goal. That’s when things begin to get weird. On first down, the Indians received a 5-yard penalty for an illegal procedure, moving the ball back to the 7-yard line. Repeating first down, Davis attempted a pass to Johnson down in the corner but overthrew his receiver, making it 2nd and goal from the 7. The Indians would then move down to the 4-yard line 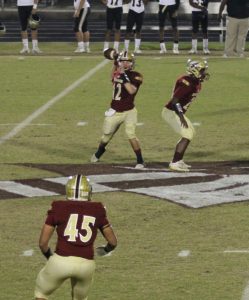 on a Stanley run, making it 3rd and goal. Then on 3rd down, Davis would retreat for a screen pass, but could not find an open receiver, so he threw the ball out of the end zone for an incomplete pass, only to be flagged for an intentional grounding. This moved the ball back to the 28-yard line and, with the loss of down, forced Tate McDaniel to reach for a 45-yard field goal, which had plenty of distance but missed just wide to the right. Following the play’s completion, the Vidalia sideline, still upset by the intentional grounding call, was flagged for an unsportsmanlike penalty, which gave the ball to the Tigers at the 35-yard line.

From there, the Tigers took just 8 plays to get their only score of the night, a 5 yard run by running back Robert Allen to tie the score at 7-7 with 8:53 to go in the half.

The Indians would go three and out on their next possession, punting the Tigers down to the 21-yard line. Again the Indian defense would rise to the occasion, allowing Swainsboro to gain only 4 yards and force another punt.

The Indians would have the ball two more times in the half, with both drives winding up inside the Tiger 15 yard line only to come up empty on both occasions, with one drive ending on an interception in the end zone and the other ending as time ran out in the half. 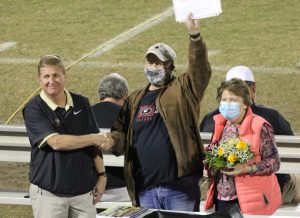 The Indians would get their 2nd offensive touchdown of the year on the first play of the 4th quarter when Bryce Davis would take the ball off the left side from the 1-yard line to put the Indians up 14-7 with 11:57 to go in the game, capping a 13 play 78-yard drive. 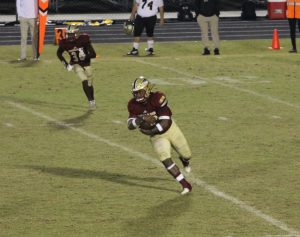 On the next Swainsboro possession, Jaylen Burns got the first interception of his career on a 3rd down throw by Ty Adams, returning it to the Swainsboro 34 yard line.

But four plays later, the Indians would turn the ball back over to the Tigers. Following a run that took the Indians from the 25 to the 13-yard line, Stanley would get the ball jarred loose on the tackle, with Swainsboro recovering, with 8:12 to go in the game.

Again the Indian defense would rise to the occasion, allowing Swainsboro to move the ball 10 yards in 5 plays and forcing a punt with 6:10 to go in the game. On the play, the snap to Jerrod Stewart sailed over his head into the end zone, where Jordan Powell recovered the ball for the Indian score to make it 21-7 following another McDaniel PAT.

Swainsboro then went three and out on their next possession against the tough Indian defense forcing another punt.

The Indians got a hand on the punt this time and took over at the Swainsboro 32 yard line with 4:20 to go in the game.

Despite having to endure Swainsboro, using up 3-time outs, the Indians moved the ball to the Tiger 5 yard line before taking two knees and running out the clock.

The Indians finished the regular season with a 7-2 record, despite starting the year at 0-2. The Region 2AA Championship was the first one for Vidalia since the 2014 season.

The Indians outgained Swainsboro 337 yards to 168, with 111 yards through the air and 226 yards rushing, while the Vidalia defense held Swainsboro to 82 yards passing and 86 yards rushing. Photos courtesy of Carroll Williams