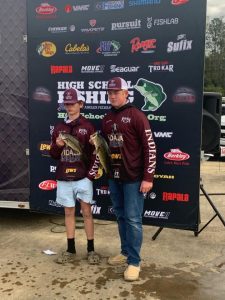 Two Vidalia High School anglers made history Saturday as they competed in the first-ever GHSA Bass Fishing Tournament at Lake Seminole in southwest Georgia. Luke Lariscey and Noah Cummings, who are part of the Vidalia High School Bass Fishing Team, competed against 120 teams from around the state in the Lake Seminole qualifier, placing 38th with a two fish weight of 4lb & 11oz.

The weekend which began on Friday with the team pre-fishing the lake concluded on Saturday afternoon with the weigh-in, and Coach David McLeod said that he couldn’t be prouder of the young men. “I think this was a great first tournament for our guys, who were up against guys who fish in tournaments all the time. The experience of a big tournament and having the honor to be a part of history is really neat.”

The team, which also includes Max Beverly are all freshmen, and McLeod sees that as an advantage, “we are very young, so our guys are only going to get better with time, and we still feel that we have a good chance to qualify for the State Tournament, which will be held in May.” 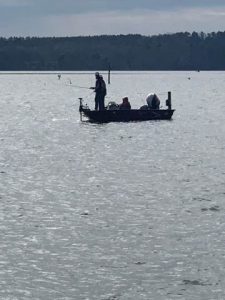 Bass Fishing, which this year became an official sport of the GHSA, takes a lot of time and practice to succeed. Mcleod says that his team is committed to doing what they have to do to be a top team in the state, “our guys know what it takes, and they understand the commitment and dedication it takes to get better, so I think you will see some good things out of this bunch.” 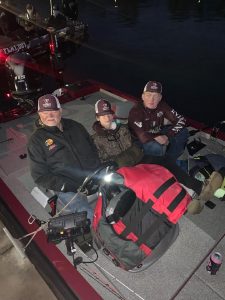 The sport also takes equipment, including an outfitted boat with a Boat Captain, and without the school having a boat, they turned to local sportsman Ronnie Green who not only allowed the team to use his boat, but also was the Boat Captain. “I can’t thank Mr. Ronnie enough for his time and generosity,” said McLeod. Without Mr. Ronnie, we wouldn’t have been able to do this, and for him to give up his weekend to help us out is really appreciated.”