In a week that will end with the Vidalia Basketball Programs playing four times in 6 days, the teams are off to varied starts. The Lady Indians and Indians swept Bacon County at home on Monday night, and then the two teams split with rival Toombs County on the road Tuesday night, with the girls taking a loss and the boys rolling to a win. The two teams will travel to Alma on Friday to take on Bacon County and then return home on Saturday for an afternoon match-up with East Laurens. 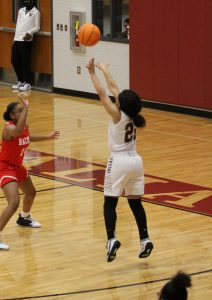 On Tuesday night, the lady Indians got off to a slow start trailing 6-0 to begin the game but then went on a 13-2 run to end the first quarter with a 13-8 lead. From there, the Lady Indians never looked back en route to a 55-33 win. Chineye Edwards scored a season-high 11 points to lead the Lady Indians, with Treyunna Roundtree adding 9 points. 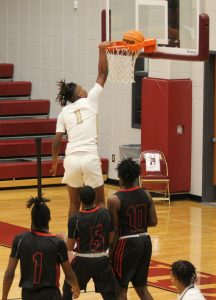 In the boy’s contest, Bacon County used a barrage of three-pointers to take the Indians to overtime before the Indians were able to pull away for a 47-42 win. Kobe Troutman and Terriyon Moore combined six three-pointers in the first half for Bacon County to account for 18 of their 23 1st half points to lead 23-20. But the Indians outscored the Raiders 10-7 in the 3rd quarter to pull even at 30-30 after three-quarters of play. The Indians looked like they would pull away late in the 4th quarter and led by 6 points inside 3 minutes to play in the game. Still, three-pointers by Troutman and Tyronn Dean pulled the Indians even before Vidalia went up 2 with just over a minute to go in the game. Then with 40 seconds left to go in the game, Moore took a pass on the baseline and laid the ball in to tie the game. On the play, he was fouled and went to the line for the go-ahead free throw. But Moore’s shot missed off the rim, and the Indians secured the rebound. After two timeouts, the Indians got the look they wanted, with Matt Hill getting off a shot from the left block but missed off the front iron. Bacon grabbed the rebound and quickly moved the ball into the frontcourt, where Deen missed a runner to end regulation with the score tied at 39-39. The Indians were able to outscore Bacon County in the extra period with some key shots from the floor and some huge free-throws down the stretch from Ira Clements and Ty Dalley to secure the win. The Indians were 15 of 16 from the Free-throw line for the night, with Dalley converting on 10 of his 10 tries.

On Tuesday night, the Lady Indians ran into a hot Toombs County team who had won 3 of 5 Region games since losing to Vidalia on the January 5th, including an 11 point win over then number 4 Woodville-Tompkins. KayKay Mobley and Aniyah McKinnon combined for 49 points for Toombs on a night when the Lady Indians were outscored 38-23 in the 1st half. From there, it was just a formality as Toombs County defeated the Lady Indians 66-47. Treyunna Roundtree, with 11 points and Dakota Jinks with 10, led the Lady Indians in scoring, who fell to 7-8 & 3-4 in 2AA play.

In the boy’s contest, Ira Clements hit five three-pointers to lead the Indians to a 69-36 romp of the Bulldogs. The Indians allowed Toombs just one Field Goal in the first two quarters as Ty Dalley and matt Hill contributed 12 and 11 points, respectively. The win in which the Indians continued their good free-throw shooting (8-10) moved the Indians to 10-5 and 4-3 in Region 2AA play.